Ahhhhh. Finally, I thought this might just be a movie so bad that it's good. All I was looking for, was one glimmer of hope, one tiny sparkle that would make me say 'Okay, I can still watch bollywood movies', but Nooo !! This movie is a pain.
It's too bad to be a Luck By Chance, too good to be a Gunda, but I think you're just right for Amul Chocolate. This movie however, isn't.

Chapter 1: GENELIA.
Okay tell me seriously....what the hell is up with Genelia? Why exactly is she liked by even one human being? She can't act to save her life. People were ga-ga over her after Jaane Tu Ya Jaane Na, but come on, seriously...was she any good? No seriously....was she? I remember her from one of my all time favourite movies. My very first movie in Bhubaneswar. A movie that was going to set the tone of my engineering in that wonderful wonderful paradise of a place. A mind boggling romance Starring Riteish Deshmukh and She-Who-Must-Not-Be-Named, called 'Tujhe Meri Kasam'. I think that movie broke all box office records....of Maharaja Cinema Hall Acharya Vihar.
She squeaks rather than talk, gawks rather than look, can't dance worth peanuts. Picture the scene with Shahid scratching the chalk board with his nails to stop the children from screaming. Now magnify that 2 min scene to 3 hours. That, my dear readers, is what Genelia's voice and accent in that 3 hour God Forsaken movie did for me. I hate female Genelia. There, I said it. And I know you do too, you're just confusing it with another similar sounding word from your class nine biology books aint'cha? Naughty naughty.

Chapter 2: SHAHID.
As my friend Avinash Patel puts it, we have always had problems with Guys who are girls' heartthrobs. I think that is one big reason we never got around to liking Shahrukh Khan. But trust me when I say this, that is not the reason I dislike Shahid Kapur. This is so not the right role for Shahid. I mean come on, are you seriously saying that bollywood came up with a dance movie, and the guy dancing is Shahid? He's no Patrick Swayze ladies and gentlemen. I mean even Shahrukh did a better job with his Hawa mein aath banana, le ban gaya step soniya, tu ban gaya HEP soniya. (A song ironically called Dance pe Chance).

Chapter 3: SCHOOL OF ROCK INSPIRED??
So much potential the movie had. Alas, the guys had to waste more footage on how Shahid washed his clothes in the school loo, rather than focus on the children practicing for the dance competition. Such a waste. And those totally non-cute kids won with that shabby dance? Why? Because Shahid made a determined face? Because Genelia prayed so convincingly? Because Stone Cold Said So?
Again, this movie is no School of Rock. It's no School of Dance. Its not even a bloody IIPM School of Management.
If you want to see a 2 hour movie shrunk effectively as a movie side plot, I suggest you watch 'The Apartment' starring Jack Lemmon and Shirley McLaine. And then watch Sharman Joshi's subplot in Life in a Metro. And be amazed.

Chapter 4: Cliches Wide Open.
Right from the dagabaaz friend (played by none other than the world famous in gajapatanagar Vikas Bhalla, with such amazing song hits to his name as Hai Dhuan Hai Dhuan and Awara), the baap in trouble, the struggling actor, the rags to riches story, the girl, the rain, the touchy feely in the car, the kids pooling in the tiffins, winning the dance... the only thing they missed out was Shahid being shot by the kid (who used to be cute some tv ads ago) for bhiolating his sister Genelia, but still dancing and landing the role, and dying a year later upon getting out of the car (hence the term Red Carpet....har har har.) Faarmula Pikchur. 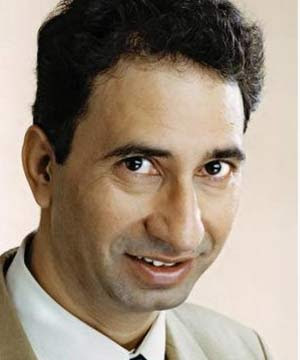 If I see one more of these, I'm gonna kill myself. And why is it the same guy playing a Parsi everytime man? Even I can say 'Ae iss maheena ka bhada de de ne dikra' in a funny accent. But no, I am mistaken. This wasn't the cliched landlord. No No No. There was a twist. I don't know if you noticed the slight nuance. This once, had a body itch that wouldn't go away!! Marvellous. The vagaries of Indian Cinema.
Can someone else apart from Kurush Deboo please play a Parsi?
Can Kurush Deboo please play something other than a Parsi?

Chapter 6: TheMuzeek.
I really don't need to write anything here. I am yet to think of anyone who could have done a worse job than Adnan Sami has on this filthy piece of Garbage.

The one and only good part of the Movie. Satish Shah. Truly funny in the entirety of 5 mins that he has on screen. I'd so rather watch him as a corpse dressed as Draupadi though. But I jest you not, I was actually lol-ing when Satish delivered his lines...to perfection.

You guys must watch this movie. Just to realise what toxic waste we are exposed to nowadays going by the name of mainstream Hindi Cinema.

An excerpt from Wikipedia:
Katrina Kaif was rumoured to be Shahid’s co-star but the makers eventually chose Jiah Khan. She shot for the film but was asked to leave halfway through. Reportedly, she got over-friendly with Shahid Kapoor and was not doing her job well. She was replaced by Genelia D'Souza who shot her scenes in a whirlwind schedule.
LOLOLOLOLOLOLOL.

Female Genelia!!! Ladke form mein ho!
The khunnas with heart-throbs remainds me how I used to hate Dravid in 96-97. Then Dravid-Laxman happened; I became a fan, as girls moved on to stupid Yuvraj.

IIPM !!! the long haired dude also has a movie disaster to his credit - Rok sako toh rok lo - which was a modernised version of Jo Jeeta Wohi Sikander - and failed miserably !!!
Incidentally, it had a song with RSTRL as the lyrics - i shit you not !!! Guess he just counted his chickens before they had hatched